Making connections is a critical element of any academic career. Because colleagues may be across the world, social media can be a useful tool for starting and developing relationships with other scholars. A basic use of social media, is periodically updating a profile with information about conference presentations or recently published articles. These kinds of posts notify audiences about a scholar’s academic life and also may be of interest to friends and family.

More and more, however, academics are using social media not only to maintain connections, but to gain a following. They write posts that connect deeply, advocate for a cause, or inform their followers about a truly stimulating idea. Their social media presence contributes to their reputation, introduces their ideas to new audiences, and even can influence a conversation. For example, some history graduate students and faculty from a variety of universities around the country have begun participating in virtual movie screenings. During these screenings, they all watch the same Netflix film together and tweet their reactions. The doctoral candidate who is the architect behind these screenings said that they helped him stay “intellectually engaged with an academic community.” Social media may also help increase access for those in marginalized communities including scholars with disabilities, as Professor Jason S. Farr and Postdoctoral Fellow Travis Chi Wing Lau argue.

This isn’t to say, however, that there aren’t risks associated with social media use. Lecturer and Senior Fellow Gordon Fraser argues that Twitter’s abbreviated format and polarization can “reduce academics to mere peddlers of opinion.” Other scholars have been the targets of hate on social media. After Professor Albert Ponce gave a lecture in which he discussed white supremacy and racism in the United States, he received “attacks on Facebook and threatening voice messages and emails.” While anyone may attract the ire of partisans on social platforms, research shows that this harm is unevenly distributed across identity. A 2018 study from Amnesty International and Element AI, found that 7.1% of the messages sent to women were “problematic” or “abusive.” Women of color were 34% more likely than white women to receive these messages and black women, in particular, were 84% more likely than white women to receive these problematic or abusive messages. Ultimately, each scholar must determine how these risks compare to the potential rewards of using social media.

This page is intended to introduce academics at all levels to the way that social media can be used to build and sustain an intellectual network. Here, we group social media posts across Facebook, Twitter, and Instagram into three categories based on their purpose: to inform, to connect, or to advocate. While these categories are in no way inclusive of all social media posts written by academics, our informal study has shown that these kinds of posts are common among scholars. These categories are also not mutually exclusive. In actuality, authors often blend these categories together to write compelling posts. This page includes several thought-provoking examples of each post category from UW-Madison faculty and graduate students and provides commentary about each example. By discussing these examples, we hope that you will be able to learn more about how to effectively engage with your audience on your platform of choice. We also want to celebrate some of the powerful and impressive work that our colleagues are doing at the University of Wisconsin at Madison.

As you’ll see from the examples below, social media posts are rhetorically complex and may be interpreted in a variety of ways.  This interpretation is dependent on the reader’s relationship to the post, among other factors. The explication below suggests some of the many effects and goals of these posts.

While using social media to inform may seem straightforward, in actuality, it can be challenging to create a post that both informs and encourages others to engage with the content that you’re posting. Some exciting posts that we see in this category mix the factual with the personal—they tell audiences something more than can be read on Wikipedia, in a conference’s program guide, or publisher’s website. In the first example below, we see Professor Ainehi Edoro tell a story about her experience in Tübingen, Germany, via the Instagram account of Brittle Paper, an online project—founded and edited by Edoro—that exhibits African writing and literary culture.

The next example in this category is from Professor John Hawks, who has used Twitter to point out a factual inconsistency in a newspaper article. The article in question was later edited to note that one of the researchers for the study featured in the article had a possible conflict of interest.

Deplorable that the @washingtonpost is spreading the nonsense that "Horns are growing on young people's skulls". https://t.co/OUCeNVNZQ9 There is an interesting story here, and part of it is about journalists' gullibility and moral panics. pic.twitter.com/4Nc7Ow41BY

Another key purpose of social media is to connect with followers. (Of course, we might say that every post’s goal is to connect with others, but some posts seem to foreground this purpose more than others.) Posts whose primary goal is to connect often ask questions, use humor, and exhibit genuine emotion in order to relate to their audiences. Below, graduate student Erica Kanesaka Kalnay comments on Easy brand slippers to explore her friends’ feelings of nostalgia on Facebook. 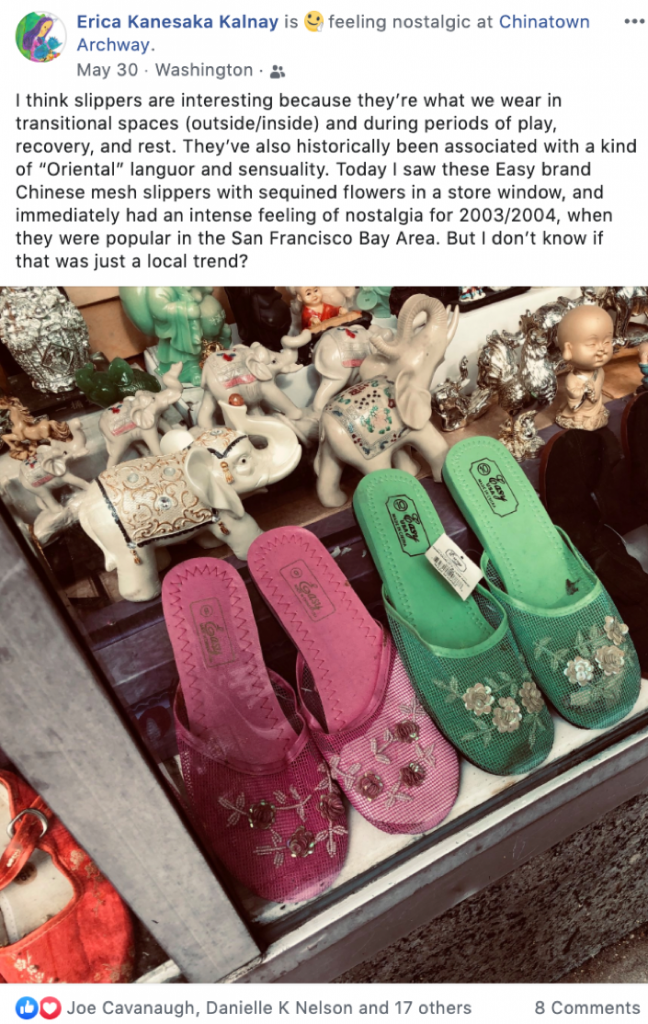 In this unconventional tweet about fruit snacks, Professor Karl Broman links to a page on his personal website that describes an informal research project that he completed with his children about the flavor distribution of their favorite brand of gummy candy.

Are fruit snacks clustered? The evidence is weak. http://t.co/bp5SbtqjMq pic.twitter.com/1hKNe3myA1

Finally, graduate student Danielle Nelson shares a photo of her collections of Sylvia Plath books on Instagram and recalls warm memories of a conference she attended in Belfast. 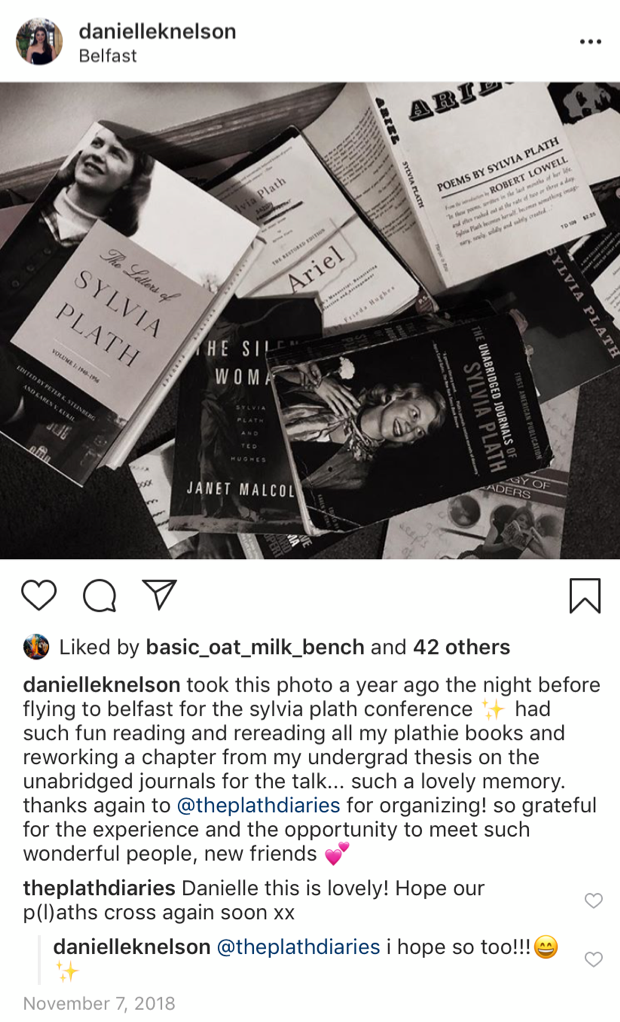 Because of the public nature of social media and its accessibility to audiences beyond the academy, one of the most powerful uses of social media is to advocate for social change. We often see scholars draw on their research to influence public opinion. Below, in a viral tweet, Professor Sami Schalk responds to comments criticizing Serena Williams after her performance at the 2018 Tennis Open Final. Schalk cuts to the heart of the controversy and cogently responds to critics who disparaged Williams for her outbursts in reaction to what many perceived to be the match’s sexist and racist officiating.

Black women are allowed to have feelings in public.

It doesn’t make us weak, immature, disgraceful, unstable or an embarrassment.

If you’re embarrassed for a black woman expressing emotion in public, those are your feelings not hers.

Black women are allowed to have feelings

Below, Professor Kristen Slack breaks from the 280-character limit to advocate for funding programs designed to combat child maltreatment in a series of tweets. Here, Slack merges the genres of social media and academic prose by writing at length, citing her sources, and including statistics.

This is an accordion element with a series of buttons that open and close related content panels.

A Short Guide to Close Reading for Literary Analysis

Planning and Writing a Grant Proposal: The Basics

Writing an Abstract for Your Research Paper

Reading for a Review

Writing a Review of Literature

Writing for the Web

Writing for Social Media: A Guide for Academics