Use the guide below to learn about the elements of a blog post and how to gain an audience.

What blog posts can do

Blogging, or writing short entries on a website, can allow you to offer opinions, share ideas, or do independent reporting, but most importantly, blogging can help writers have conversations with readers. What makes blogs so different from journalism, as the authors of The Elements of Blogging: Expanding the Conversation of Journalism suggest, is the discussion between writer and reader. Blogs can be a forum for writers to get feedback on half–formed ideas and emerging stances, and through comments, readers can talk with and back to writers and build communities. But what draws readers in? Read through the material below to learn how paying attention to a range of blog elements (including clear headlines, engaging pictures, and distinctive ledes) will help you build an audience.

In The Elements of Blogging, Mark Leccese and Jerry Lanson dissect blog posts in order to identify and examine their key parts. Below are some of the elements they highlight as well as some examples from local blogs.

A headline or title not only helps draw in readers’ attention with an interesting hook, but by containing keywords that Google and other search engines use, the right headline can bring anyone to your blog. As Leccese and Lanson note, search engines work by creating indexes of the words they find on the web. By using keywords in your headline, there is a greater chance that more browsers will find your blog. Headlines, however, are more than just keywords. They need to be short, 10 words or less, and intriguing.
Look at the headline on this article from University of Wisconsin–Madison’s Center for Limnology’s blog. 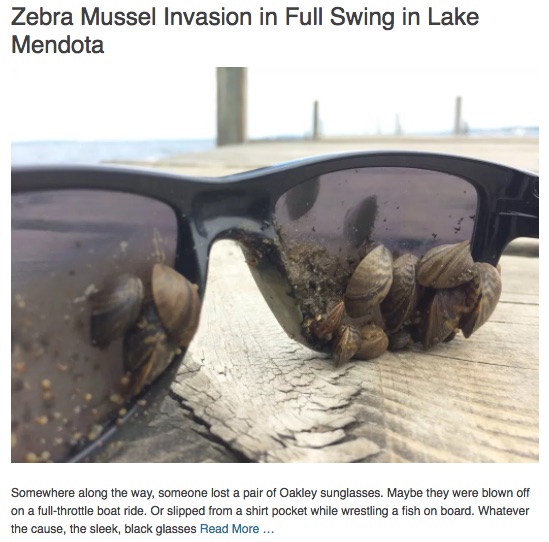 Through this blog, the Center for Limnology communicates with university colleagues, Madison residents, and students about current fresh water research and reflections. In this post center staff member Adam Hinterthuer writes about the presence of an invasive species in Lake Mendota. The post’s clear, engaging title uses keywords so that this post appears in the first several search results for anyone looking for information about “zebra mussels” and “lake mendota.”
When possible, your headlines should be in the present tense, and you shouldn’t repeat the headline in the first lines of the post.

The first sentence of a post should have a conversational tone and articulate the main point of the blog post. Internet readers can easily navigate away from a post, so making your lede interesting and to the point is important. Look at the opening lines from University of Wisconsin–Madison Antrhopology professor John Hawks’ blog post “Bringing together climate and ancient DNA to look at a micro–instance of extinction”:

Ed Yong describes the results of a cool new study of mammoth extinction on Saint Paul Island, in the Bering Strait between Alaska and Russia: “The Lonely, Thirsty, Final Days of the Doomed Alaskan Mammoths”.

Hawks’ post opens with his main point: how scientists determined when and how mammoths went extinct on the island and why it is a interesting case study of extinction. The assessment of the study as “cool” is conversational, and immediately mentioning this study suggests to the reader that this post will both summarize and highlight the methods scientists used. The title of the study itself is intriguing, invoking a dramatic scene. Even though both the study’s title and the content of the post could easily be in hyper scientific jargon, Hawks’ opening sentence previews his particularly accessible approach for talking to the public about science.

Pictures not only break up text on a page, but they can also help make your point clearer. Pictures tell stories, but they need to be part of the discussion. Include captions by your images that explain how the image adds to the point you are making. For example, look at these two images from Professor Elizabeth Hennessy’s post “Global Visions: Rethinking the Globe and How we Teach it” published by University of Wisconsin–Madison’s Edge Effect digital magazine: 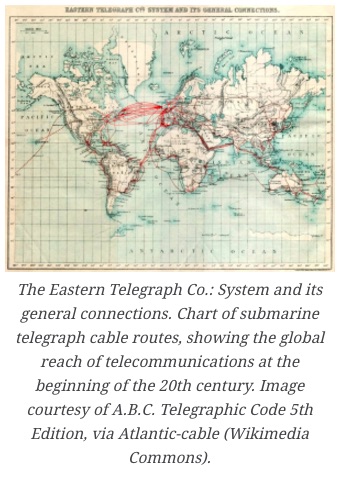 The blog post is an instructor’s reflection, summary, and analysis of an environmental humanities course and the resource website developed by the students as a final project. These images effectively communicate what the blog is saying about our knowledge of the world, which in greatest part is from maps. In teaching this class, Hennessy strove to have her students consider that “global space is a historical product rather than a planetary scale,” and thus, global space needs to be understood from the stand point that the “global” is produced by “histories of exploration and imperialism, uneven economic development, scientific inquiry, and environmental change.” The 17th century map that opens the blog and the telegraph cable map embedded further into the text emphasize history and imperialism’s role in thinking about what “global” means.

Hennessy’s caption for the telegraph map not only connects the image to her point, but it also provides copyright information. If you use photos on your blog you must give credit to the source. The Creative Commons on Flicker and Wikimedia Commons both have public domain images you can use while giving the photographer credit.

The photo on the above Center for Limnology post is interestingly composed and serves as an object lesson for the post as a whole.

Links give extra information to your readers. In Hennessy’s post, she often links to the site her students created and to the specific syllabi that encompass each of the four frames for understanding “the global” that her class analyzed. Having links that provide a direct route to information and resources allows your blog to make the most out of being on the web.

Block quoting gives readers’ eyes a break and bolsters the author’s credibility. Using a source’s words instead rephrasing shows that your points are well supported.

Writing a good take–away can, as Leccese and Lanson point out, help readers remember and engage with your post. For the most part, Hawk’s blog summarizes and applauds the study of mammoths on Saint Paul Island, but he ends the post by saying:

However, I hesitate on one point. I would not so quickly assume there was never a short or intermittent presence of humans on the island, and that humans may have been involved in the mammoth extinction.

Questioning the study and the impact of humans is a provocative alternative view. It makes readers think more critically about the study and develop their own opinion, and in doing so, Hawk’s post invites a conversation.

A Note on Organization

Effective posts make at most two or three focused points and provide evidence to support them. Each of the three examples offered exemplify clear, brief points. “Global Visions” reflects on the class and the four frames of understanding “the global” the class used. Numbering in your post can help you as a writer limit your points and can help your reader understand the organization of your post. By clearly identifying what you want to analyze or argue and by providing support for your main points with research, anecdotes, or examples, you can establish a clear focus.

Why having an audience matters and how to get one

Blogs have the unique capability to allow readers and writers to interact. Thinking carefully about how to not only get readers to your blog, but also how to foster community and conversation are important elements of writing a blog. People often find blogs on the web through social media. UW–Madison student Ashley Hampton’s Raw in College lifestyle and food blog has reached nearly a million hits in part because it is linked to Hampton’s twitter, Instagram, and YouTube accounts. Once readers have found a blog, they might check it once a week to see what’s new, but posting on Facebook about recent entries will help establish an audience.

Allowing comments on your blog will bring readers back because by engaging in conversation you build a network of people who are interested in your blog’s topic and want to continue thinking about it with others. Sometimes it can be hard to build up your comment section, so don’t be afraid to ask friends or family members to comment and get the discussion going. You could also end your post in a question.

Lanson, Jerry. Writing for Others, Writing for Ourselves: Telling Stories in an Age of Blogging. Rowman & Littlefield Publishers, 2011.

Leccese Mark, and Jerry Lanson. The Elements of Blogging: Expanding the Conversation of Journalism. Focal Press, 2016.

This is an accordion element with a series of buttons that open and close related content panels.

A Short Guide to Close Reading for Literary Analysis

Planning and Writing a Grant Proposal: The Basics

Writing an Abstract for Your Research Paper

Reading for a Review

Writing a Review of Literature

Writing for the Web

Writing for Social Media: A Guide for Academics